***How to Predict Fuel Consumption

Predicting the number of gallons your vehicle requires to get to a specific destination can be valuable information to accurately predict the fuel cost of the trip. In addition, this knowledge is especially valuable when driving for long distances in remote areas, where there is often a great distance between gas stations. Suppose, for example, that you wanted to drive from Los Angeles to San Francisco, which is 383 miles away. At 20 miles per gallon, how much gas will the car use for the trip?

1. Determine the total number of miles from your starting point to your destination. Here, there are 383 miles between Los Angeles and San Francisco.

2. Determine how many miles per gallon your vehicle gets. Here, the vehicle in this example uses 1 gallon of gasoline to travel 20 miles.

3. Divide the number of miles to be traveled by the miles per gallon. In this example, divide 383 by 20.

4. The resulting number is the total number of gallons of gasoline required to reach your destination. In this example, it would take 19.15 gallons to travel from Los Angeles to San Francisco.

***How to Calculate Fuel Cost Adjustment

It’s a simple fact of life that energy costs money, and the cost, rather than remaining fixed, is subject to the vicissitudes of the market. This is as true for the average consumer, as it is for utility companies, which impose a fuel cost adjustment (FCA) to account for the discrepancy between the official rate charged to consumers and what the utilities actually pay for fuel. According to the Tennessee Valley Authority, such costs can change by as much as 100 per cent in a single month, highlighting the need to include a FCA in the accounting. The FCA is calculated according to a simple formula.

2. Determine the rate that was charged to customers in the preceding billing period. This will be printed on the billing statement. 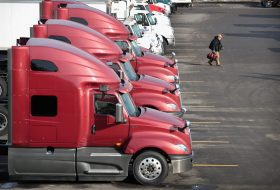 Revenues Rise in 3Q for 3PLs

An Ex-trucker has some questions about the Tesla Semi