New Brunswick lobster fishers, upset at the low cost of Maine lobsters, want processing plants to stop accepting cheap lobster from the U.S. Protesters at several plants in New Brunswick surrounded trucks carrying Maine lobster, blocking entrance to the plants. Many trucks were forced to turn back, still fully loaded.There were scattered reports of mild intimidation by protesters, but no violence was reported.

According to the Portland Press Herald, protesters had threatened to tamper with some truck refrigeration equipment, spray paint trucks and even open trailers, exposing the lobsters to warm air.

Intervention by police kept the protesters at bay and no cargo was damaged, the paper said.

Canadian fishers are demanding $4 a pound for their lobsters, but processors are paying only $2.50 to $3. About 70% of Maine’s lobster harvest is processed in plants in New Brunswick, Nova Scotia and Prince Edward Island.

On Thursday, a New Brunswick Court of Queen’s Bench judge granted a 10-day injunction to prevent lobster fishermen from blocking fish processing plants across the province in protest of a glut of cheap U.S. lobster.

The Canadian Broadcasting Corporation reports that nine fish processing plants in southeastern New Brunswick sought the injunction. Since the protests began, 1,800 workers have been idle and the plants have lost $1.5 million per day.

Under the injunction, only six people can protest at a time and they must stay 200 feet away from the plants.

In a press release, Maine Senator Olympia Snowe, called the situation unacceptable, and warned that no acts of intimidation, coercion or violence will be tolerated. She said order must be maintained to ensure the relationship between Canada and the U.S. is not undermined when it comes to “critical fisheries and maritime issues.” 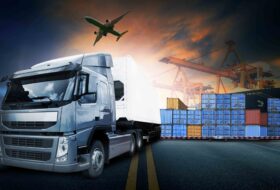 2 Of The Latest Trends In Freight